The pharmaceutical world is one of the most highly regulated sectors there are. However, access to a drug can also take place through special routes, which are in place to manage exceptional circumstances. It is useful to account for such exceptions in order to maintain the right degree of flexibility while continuing to follow the rules.

The issue of “special” routes has always been dominating the hyper-regulated world of the approval of new drugs.  On one hand you want to avoid wasting time as you might be looking at a potentially safe and effective new treatment option. On the other hand you need to safeguard public health and avoid exposing the patients who get the treatment to preventable risks that have not been identified yet as you rush to approve the introduction of the drug in the market.

Over recent years the need to access drugs “outside of their approved indications” has often been fuelled by sensational media phenomena such as the Di Bella treatment or the Stamina case. Being able to choose a treatment regardless of whether the officially recognised regulatory bodies approved its use has put a strain on the regulation model for access to drugs. It is actually a recurrent phenomenon that calls into question the time deemed necessary for the correct assessment of efficacy and safety standards. All this is linked with the rhetoric of the need to favour innovation without wasting time because of useless bureaucratic processes.

The pandemic- once again the culprit- showed us that during an emergency the drug and vaccine approval time could be reduced significantly. This could be done predominantly by directing more resources onto the assessment of new drug dossiers and overlapping procedures that would normally take place in a sequential manner. This is the so-called “rolling review” approach whereby data are examined as soon as they become available and the registration dossier is created at a faster pace. It would not be feasible to follow this type of process for every new drug approaching the market, both in terms of consumption of resources and because it would mean cancelling the notion of emergency itself.

Having said that, a modern regulatory system should account for exceptions and be able to manage those “extraordinary” but rare cases. The table below shows some of the regulatory routes that one can take to access a drug under special circumstances. Such processes have often enabled the Italian National Healthcare Service to make off-label drugs or treatments that have not yet been approved available. Additionally, in some cases these are experimental drugs or treatments that are only available in other countries. You are looking at drugs that no one has yet completed the approval and registration process of so those who ask to utilise them are mostly clinicians, patient associations, scientific societies or prescribing physicians. The clinician- and some times the Ethics Committee too- is responsible to assess how to utilise the drug appropriately.

A modern regulatory system should account for exceptions and be able to manage those “extraordinary” but rare cases.

Over time it has become necessary to be more and more specific around the minimal efficacy data needed to activate one of these regulatory pathways. In fact, in some ways the need for a treatment or the complete lack of therapeutic options is not sufficient to turn a potential treatment into one of the candidates for such applications. In any case you need to have data and studies supporting the hypothesis that the new treatment proposal would be more effective compared to the natural evolution of the condition and that it would be associated to an acceptable degree of safety.

An important factor that should be taken into account concerns the parties responsible to make decisions around prescribing such drugs for treatments. The fact that there is no official party responsible to authorise the sale of a drug and that there is a way to access it means that the responsibility is shared between the remaining parties of the chain- the prescriber, the institution that provides it, the national and/or local regulator and in some cases even the patients themselves through informed consent.

Over time the availability of such routes has enabled us to manage treatments that were not contemplated in the indications listed on the drug information sheets even though these might be largely included in daily clinical practice. In such case you would be dealing mostly with lists of treatment indications that are reimbursed in line with Law n. 648, from 1996, which enables the National Healthcare Service to cover different drugs and treatment indications that would otherwise be considered off-label (these often include paediatric treatments).

Throughout the years some of these regulations were modified to include more case scenarios and drug types. More recently there have often been attempts to view these exceptions as accelerated processes that could somehow make the traditional assessment route shorter. The risk is to denature the logic of such exceptions to the rules and once again to take everything back to the variable of the approval time of the new drug. 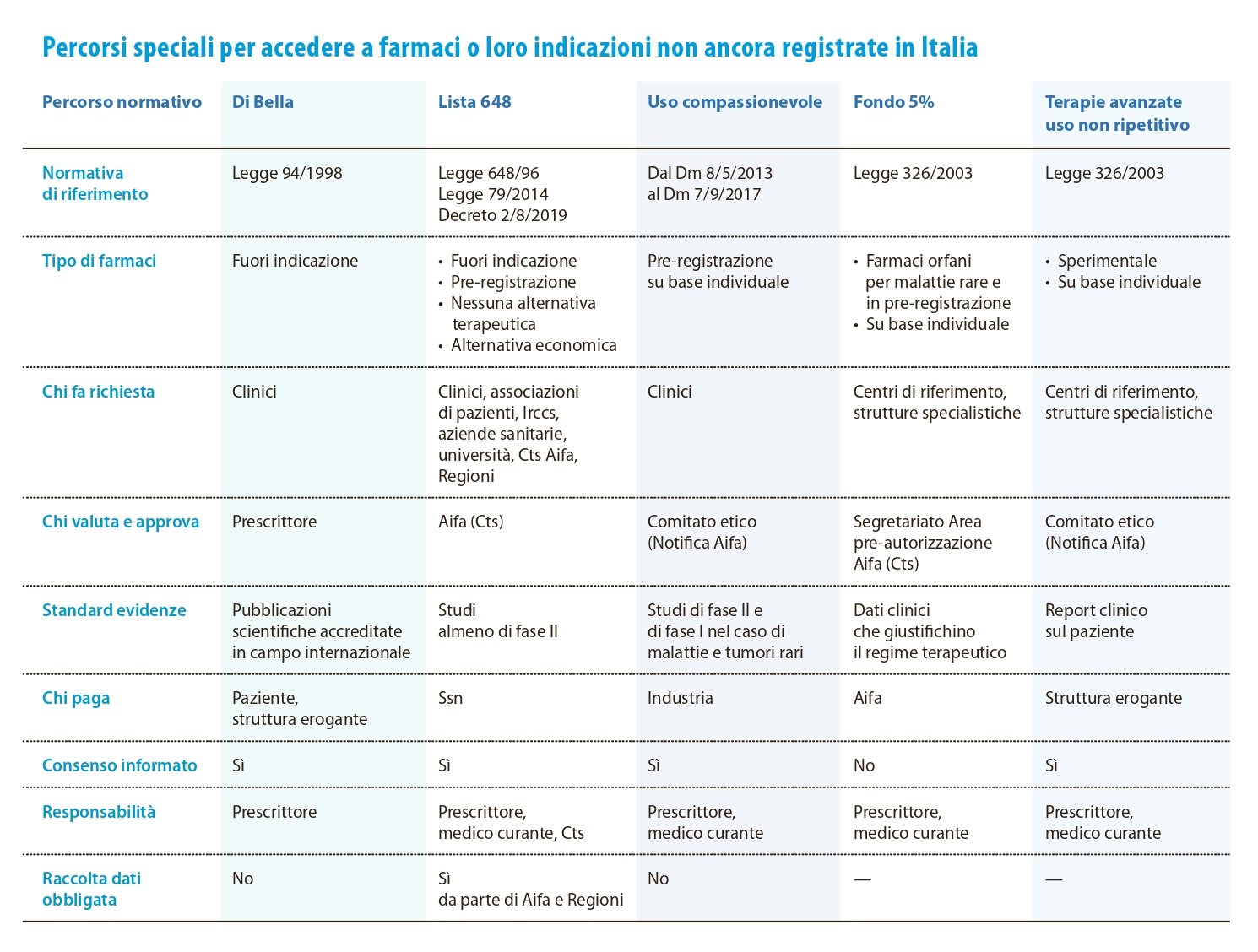 Special routes to access drugs or their indications that have not yet been registered in Italy .

There is one aspect that should be reviewed as it is often neglected in all of these procedures: it is the need to accompany the special application of these treatments with the need to generate new knowledge about them. In any case, these types of treatments are always associated to a high degree of uncertainty, even in the best-case scenario where they might be very promising. Therefore their use should be linked to the predefined collection of data in line with real research protocols. In such context the association between some of these special approvals and the Italian Medicines Agency itself or a collaboration between the public and private healthcare sectors would help to better define the remit of such exceptions to the rule.

The risk is to denature the logic of such exceptions to the rules and once again to take everything back to the variable of the approval time of the new drug.

Therefore there are always “special” pathways that enable drugs to be accessed outside of the routes that are deemed “normal”. This is one more feature of our National Healthcare Service that once again tries to maintain its universalistic and inclusive nature by guarantying the provision of the necessary effective care to everyone who needs it, trying not to leave anyone behind.