Containment and closeness to communicate Physical containment of psychiatric patients is still one of the most controversial and debated psychiatric assistance topics both in Italy and in the international community. This practice in fact raises many ethical, clinical, judicial and legal issues. Some- both in law and in psychiatrics- assimilated physical containment as a tool to be utilised when necessary. However, many often hold the opposite view and see this instrument as illegitimate in terms of ethics and compliance with the law and the Constitution, and they deny its therapeutic validity. It certainly is very common practice to use it and not only inside psychiatric wards. For this reason several associations united to promote the “…e tu slegalo subito (untie them now)” campaign demanding its complete abolition. In this context books such as “L’arte di legare le persone (The art of tying people)” by Paolo Milone, a psychiatrist from Genoa, definitively contribute to making containment a key issue to discuss about.

Paolo Milone is a psychiatrist from Genoa. He was born in 1954 and worked in a mental health support centre and in the emergency psychiatry ward of a hospital. This year Einaudi published his first book, “The art of tying people”. 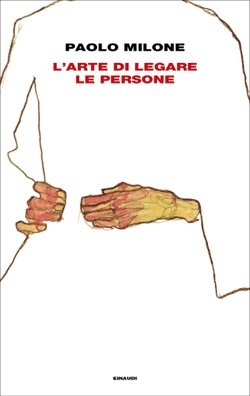 It is a fragmented and poetic text that is very sweet at times and dark and violent at others. The protagonist of the book is emergency psychiatry and this is narrated through impressions, anecdotes and reflections. Lyrical instants and moments of pure tragedy follow one another at a fast pace and seemingly without following a common thread. There is no theory nor anything abstract, just the daily hard work at the clinic, patients’ suffering and the exhaustion when getting back home from work at night… but there is also love for his crazies- that’s how the author calls them- and for his profession. He writes, “In emergency psychiatry it’s people that one has to completely accept, not their disease. Otherwise we would accept demented people crossing the road with the red light without intervening.”

The word proximity has a lot to do with containment due to its double meaning of physical and metaphorical closeness. You dedicated a large part of your book to containment. In order to contain patients one has to be near them and their body. However, this proximity and closeness that the act of containing requires also enables one to “reunite the broken fragments, put together mind and body and reunify people, just like a caster allows the bones to grow back together, making pieces into a whole.” Does containment mean proximity to you? How so?

The use of physical containment, which is an extreme act, prevents patients from getting harmed and helps those who are confused- who might not be aware of themselves, their body and the difference between themselves and external reality- to get back in contact with themselves and their body, and with the difference between them and the outside world. It’s interesting to notice that reunification is not well tolerated in some cases, whereby patients feel more anxiety due to the proximity to themselves than during separation. This aspect is part of the dynamic of continuous swinging between proximity and psychosis. When we think about the lack of proximity, hugs for example, which is imposed during this period of pandemic and social distancing, I wonder whether we are sure that psychiatric patients actually want greater proximity and more hugs. The reality is that psychiatric patients don’t want proximity back and they avoid hugs. The main reason for this is that they fear being invaded by other people because of their fragile self so they keep their distance by staying further away.

Proximity is a hot and delicate topic.

Proximity is a hot and delicate topic. Each of us maintains a basic level of safe distance from others and this varies from individual to individual. This distance, adopted by animals as well, is reduced only through courting or playful behaviour. For psychiatric patients the basic level of distance changes depending on the condition they suffer from. Schizophrenics tend to stay the furthest away from people and so do paranoids. Patients suffering with a borderline disorder- very fragile individuals- pay great attention to distancing; if you get closer they move away. Neurotics do the same. They do, even though it might be a matter of centimetres. Depressed patients don’t pay attention to distancing; they’re already focused on too many other thoughts. Patients with mania, hysteria, personality disorders or those with substance abuse issues instead tend to get progressively closer and go over people’s basic distance and tolerance levels, so you are the one to move away. It should be noted that in relationships words are factors that can increase or decrease social distance. All you need to communicate is to be at a hearing distance from the other party and you can explain yourself without touching each another. When words fail you can’t use them anymore, just like in cases of acute psychosis where you communicate using your body, you switch to full contact. The same dynamic takes place between moms and their young children. In my book “The art of tying people” the first patient I describe is someone who communicates her pain through her body- she cuts herself several times- and she communicates her interest for me by clutching my arm with her nails, a hard but effective method.

In an essay titled “Why I write” Joan Didion said, “I write entirely to find out what I’m thinking, what I’m looking at, what I see and what it means. What I want and what I fear.” On a few occasions where I had the chance to listen to her and in the final note of her book she stated that what she describes is somehow proximal to the truth. Did this margin of distance from what you truly experienced and your way of processing facts help you become deeply aware of what you think and what scares you about psychiatric care?

Being close to oneself and to reality is the hardest thing to do. You manage to live and to understand only by keeping a certain degree of distance between yourself and reality. People can only really be so close with themselves and their impulses- including the unmentionable ones- all of their ambivalences, their ill parts and their fears. A large part of ourselves is relegated to the unconscious or is projected externally onto other people. Therefore it’s inevitable that there will always be confusing moments and misunderstandings between us and others, and these are part of the normality of life. We are always far from our parts or our pieces and throughout our entire life we wonder about searching for them. Perhaps this is also one of the reasons why we feel compelled to search for other people. In some way we always struggle with a form of loneliness because we are far from ourselves. This difficulty around proximity with oneself is even greater for psychiatric patients.

Being close to oneself and to reality is the hardest thing to do.

I love one specific line from your book that says, “Words are like hay”. It’s an evocative metaphor that can be interpreted in many ways. In chapter nine, where you wrote, “words are not like the light that frightens off night ghosts” or “they are not wood you can store away for the cold season” you seem to suggest that in the psychiatric context words are dangerous, an approximation or a failed attempt to express a concept that both the speaker and the listener understand… What does this mean for treatments?

It’s really true. In psychosis words lose their communicative power and cannot be utilised. Therefore psychosis becomes a place of solitude where the sufferers are isolated from others as well as themselves. One is unable to communicate with oneself. Psychosis corresponds to the mind functioning in a primitive way so we all live close to it: drinking excessive amounts of alcohol is enough for your brain to function in a psychotic manner; experiencing cerebral hypoxemia or hypoglycaemia is enough for your brain to start functioning with more primitive processes. There is no difference between normal and mad people. There are just different ways in which our same brain functions inside each of us.

The psychiatrists’ proximity with the psychosis of their patients is another matter. Psychosis is somehow contagious. Psychiatrists- a bit like radiologists and radiations- pay attention to how long they are exposed to psychosis and they use tricks and strategies to shield and protect themselves. Everyone has their own to anchor themselves and remain close to reality.