Accept mistakes, so you can learn You talk about how your name is often considered a mistake. Is this also a reason why you’re interested in the topic?

My book Sbagliare da professionisti. Storie di errori e fallimenti memorabili (“Making mistakes as professionals. Accounts of memorable mistakes and failures”) is jokingly dedicated to my parents who gave me a name that can be easily misread. The fact that it is often corrected to “Massimiliano” is an example of our inability to accept mistakes. Even when I fill up a form people often think that I don’t know how to write my own name. However, the deeper reason as to why I am focused on this topic is that a systematic focus on mistakes, particularly in social sciences, seemed to be lacking.

We often get to hear about success stories. Why is it important to also speak about failures instead? 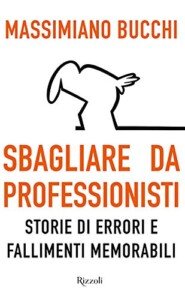 It’s important to talk about because failure- just like its opposite, success- says a lot about us and about organisations, if we know how to accept it and look at it for what it is. Looking at mistakes and the way we make them is a precious source of knowledge and self-awareness.

Is it possible to never make mistakes?

It’s not possible not to make mistakes, but one can prepare for them. Mistakes are human and should be taken into account. However, organising is feasible. We should get ready to manage the mistakes that sooner or later will take place. When I went to New Zealand as a visiting professor I was stunned by a highway sign that read: “Mistakes happen, your speed decides the outcome”. There, I think that’s an intelligent way to prepare for error and mitigate its potentially negative consequences.

It’s not possible not to make mistakes, but one can prepare for them.

What do mistakes have in common with one another?

Mistakes are very different from one another and various scholars tried to classify them. Broadly speaking we can identify four. The mistakes that characterise human beings, given the way we learn and perceive reality. Then there are those typical of the individual. Some mistakes are characteristic of a certain culture and are linked to prejudgements and stereotypes that prevent us from seeing what we need to see. Finally, there are the mistakes induced by certain common ideas such as the rhetoric of innovation. We tend to think about error as an individual fact even though we always make mistakes together with other people. The penalty kick is a classical example of what might seem like an individual mistake: we only see the final phase but behind that there is an organisation, a collective process that put the person in an optimal condition to make a mistake.

Can mistakes help with learning?

Our organisations keep on negating error or trying to change it into something different by dignifying it. We could conclude that our biggest mistake is exactly our way of looking at mistakes. However, some sectors learned to treasure errors. For example I am thinking about the civil air transport sector that, following the disaster in Tenerife, became one of the safest means of transport, as they were able to build a system with a plurality of controls that reduces the chance, not so much of individual error, but of serious consequences. Furthermore, pilots were encouraged to confess their mistakes in a database, with the guarantee of being protected from sanctions, so that important data and information could be collected. Therefore there are examples of the constructive use, but many still continue to err persevering with their mistakes.

Our biggest mistake is exactly our way of looking at mistakes.

Different studies demonstrated that, especially in the United States, every year thousands of people die because of medical error. The rate seems to remain stable even over time. Why is it so difficult to learn from mistakes?

In order to learn from mistakes firstly we should accept them. Mistakes are probably the last taboo left in our society: we are ready to confess about anything but the fact that we made a mistake. In particular, the topic of mistakes is a very delicate subject in medicine. On one hand mistakes are estimated to be one of the most relevant causes of death, while on the other there are a series of very delicate legal and responsibility aspects that do not justify but contribute to our understanding of how difficult it is to deal with error.

In medical research there is a well-documented tendency for researchers and journals to publish “positive” results and leave behind the “negative” ones that are potentially as relevant. What does this choice entail?

It is a distortion element of our medical and scientific knowledge. We are blindly selective towards mistakes: stories are told as though since the beginning there were a precise scheme and a destiny ending in success. An example of this is Google, where nobody remembers how at the beginning the two founders were about to sell everything for only one million dollars but did not manage to because it was deemed excessively high. Nowadays Alphabet Inc. Holding makes more than a hundred million dollars. What would we think of them if they had sold everything? It is very simple. We would have simply forgotten about it. Hindsight is the curse- inevitable in some way- that prevents us from dealing with mistakes.