From political decisions, from technical committees, and far from being free from violence Among the numerous social differences that emerged during the months of lockdown the dominant one was the unequal gender representation observed in the groups that managed the difficult pandemic crisis. Women were involved in frontline healthcare services but were not among the decision makers as experts. This disparity – this distance – raises many perplexities on how long the road to true gender equality really is.

Gender differences, from the spread of the infection to leadership roles

If we analyse what occurred during the Covid-19 epidemic we can observe three aspects of gender differences: the dynamics of the disease, healthcare assistance and decision-making. Past experiences with analysing the impact of epidemics have taught us the importance of taking into consideration gender differences. For example, in Africa, during the Ebola epidemic the infection rate was higher in women than men, especially due to their role within households and looking after the sick [1]. This demonstrated the importance of taking gender differences into account in the preparedness and planning of response interventions.

Observed and clinical data also showed differences around the impact of the Sars-Cov-2 virus. In Italy the mortality rate and the percentage of lethality were greater in men. Research studies highlight that, due to hormonal factors and processes linked with the immune response, the male gender is more susceptible to viral respiratory infections [2]. These mechanisms, together with the lesser incidence of cardiac and pulmonary pathologies in women, might also explain the greater impact of the epidemic on men. On the other hand, Italy and other countries recorded the highest incidence of infections among female healthcare workers, data that reflects the large presence of women in healthcare. During the Covid-19 epidemic women covered the same roles of men in healthcare. Nonetheless, female experts had very little visibility and, apart from a few exceptions, media reported only the point of view of men. Given how many years I’ve been working in epidemiological research I find it difficult to justify the gender disparity that was observed during the pandemic. The decisions made during these months will be influencing people’s lives in the short and long term, will have repercussions on the economy and on the environment, and once again they were made by only one part of the population. The Italian Civil Protection instituted a technical and scientific committee to help the Government make strategic decisions to contrast the pandemic. The committee was formed entirely by men, even though several experts came from the Ministry of Health, 55% of which is composed by female workers and where 53% of the management are women.

The World Health Organization promoted initiatives to support gender equality in healthcare professions and women access to leadership roles, also through the publication of “Gender equity in the health workforce: analysis of 104 countries”. The European Union also promoted campaigns and initiatives for gender equality, highlighting how even in the European Parliament women represent only a third of workers. Explaining the reason behind these gender differences is complex.

One of the main objections to promoting gender equality in leadership positions is that there are not enough qualified women to assume such roles. Some believe that forcing the representation of women, for example by introducing “gender quotes”, might lead to an overall decrease of the qualification level. Perhaps guaranteeing “merit quotes” would be enough.

In many contexts multidisciplinary teamwork can improve the performance of the group when seeking a solution to complex problems. Gender diversity seems to be a factor that enriches the way of working, by offering a different view of problems and a different approach to their solution, which makes decision-making processes more innovative and less quarrelsome. 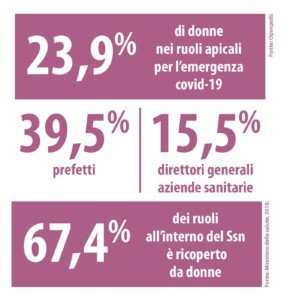 Equal opportunities at the centre of politics

In a recent report of the United Nations, Anita Bhatia, the UN Women Deputy Executive Director, declared that “While many highlighted the impact of the pandemic on women, this worry does not seem to have been a factor in the decision-making processes that men are predominantly part of”. In fact, the report shows that, worldwide, while women make up 67% of frontline staff supporting Covid patients, they only represent 25% of Parliament politicians and 10% of the heads of states or governments. For this reason the United Nations tries highlight the importance of women’s inclusion in decision-making processes. The fact that it is necessary for the United Nations to recommend this makes it evident that there is still a long way ahead to reach true equal opportunities. We clearly have a problem if, in order to obtain the contribution of women in politics or in administration committees, we need to rely on “pink quotas”. Not to mention the fact that the involvement of women in the technical committees working groups that helped the Government manage the difficult Covid-19 crisis was the result of protests around the unequal gender representation in those groups. I’m not sure how much the women involved in extremis appreciated being chosen due to their gender instead of their well-known expertise. The female population is not a “minority” that requires safeguarding and representation, it constitutes half of society, just as much as the male population does.

The prevalence of women in leadership roles is not the only factor that can change things. Always putting gender at the centre of the agenda, for all political movements, consciously and explicitly is also crucial. The road to equal opportunities is still very long and it benefits the country, not just women, because diversity is a valuable resource but it also means richness.

The less visible symptoms of Covid-19: psychological stress and anxiety

Women were less impacted by Covid-19 and the reason for this is yet to be clarified. Nonetheless, they have a higher prevalence of symptoms of depression and anxiety. These symptoms seem to get worse during healthcare emergencies. A research study on the psychological stress caused by the emergency was conducted on more than 52,000 people in the Republic of China and found that women displayed greater symptoms of psychological stress compared to men [1]. The authors of the research believe that these results are in line with data from other studies [2] and that women seem to be more vulnerable and susceptible to post traumatic stress disorders than men. In particular, during the pandemic the incidence of anxiety disorders was three times higher in women than men [3].

The greater prevalence of symptoms of anxiety in women is not a result of poor awareness of the disease or the prevention measures; on the contrary, it was demonstrated that women are better informed compared to men. Symptoms of anxiety seem to be correlated to emotional factors linked to the uncertainty around the pandemic and not knowing whether it is under control or not [4]. A recently published document entitled “Women worry about family, men about the economy: gender differences in emotional responses to covid-19” draws very interesting conclusions in this regard [5]. The analysed results conclude that women are more worried and fearful than men and this is also reflected in linguistic differences [5]. For example, the topic model analysis showed that women discuss death and disease more than men and are more worried about the health of relatives and friends, while men are more preoccupied with the repercussions on the economy. Based on this we should reflect on how the greater female sensitivity would have benefitted the management of the pandemic and its following phases, for example by making people less emotionally detached.

Social distancing allows us to protect ourselves from the risk of infection. However, not everyone could stay safe from what threatened their health and wellbeing. Women victims of violence, in fact, could not distance themselves from the risk of harm that their perpetrator posed to them. The lockdown measures zeroed their distance with the perpetrator of the abuse and instead distanced them further from the support network of services that they could rely on, the services that would support them in the journey to freedom from harm. Unfortunately they were also distanced from all the other social and healthcare services, even the emergency department, that could identify the risk of harm and their need for support. The emergency department is often a privileged observatory where women who experience abuse or violence are increasingly identified and referred for support to safeguarding and social services. Furthermore, it’s important not to forget that the closure of schools also exposed children to a greater risk of witnessing or experiencing violence in the household [1,2]. 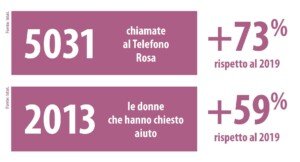 According to the estimates of a report by the United Nations Population Fund an additional two million cases of partner violence are expected to take place in the 2020-21 period. In Italy the situation is as worrying. The data from March and April registered a strong increase in phone calls for incidents of domestic violence and requests for help. Among Italian regions, Lazio and Tuscany show the highest increase. While the data from January and February recorded a decreased use of services compared to the same months from the previous year, during the lockdown the number of women who contacted the 1522-helpline increased. In 2020 the phone calls were 1151, compared to 933 from 2019. Support services recorded 716 contacts this March (670 in March 2019) and 1037 from 1 to 18 April 2020 (compared to 397 from the same period in 2019). However, this does not necessarily equal to an increase in cases of gender-based violence during the pandemic. In fact, it was found that an increased number of calls to gender-based violence helplines could be a consequence of intensified awareness raising campaigns that allow women to become more aware of the violence they are experiencing. Furthermore, this can also reflect a greater difficulty, caused by the containment restrictions, in accessing local domestic violence networks or other outreach support services, which in this case would result in women contacting support services through different routes and modalities.

Violence against women certainly has deep roots from the past but this situation of isolation further emphasised the long road that separates us from a context where we are able to face this social and public health issue [3,4]. Even though we will take time to reach a deeper understanding of the pandemic impact on gender-based violence, discussions and the analysis of data around the use of different services- helplines, police reporting, domestic violence support services (the Italian anti-violence centres) etc.- before, during and after Covid-19 will be valid tools to inform adequate policies and possible responses.

These pages are dedicated to Rossella Bocciarelli, a female friend who’s a passionate and rigorous editor of economic politics.