Measuring Covid-19: the distance from the real figures 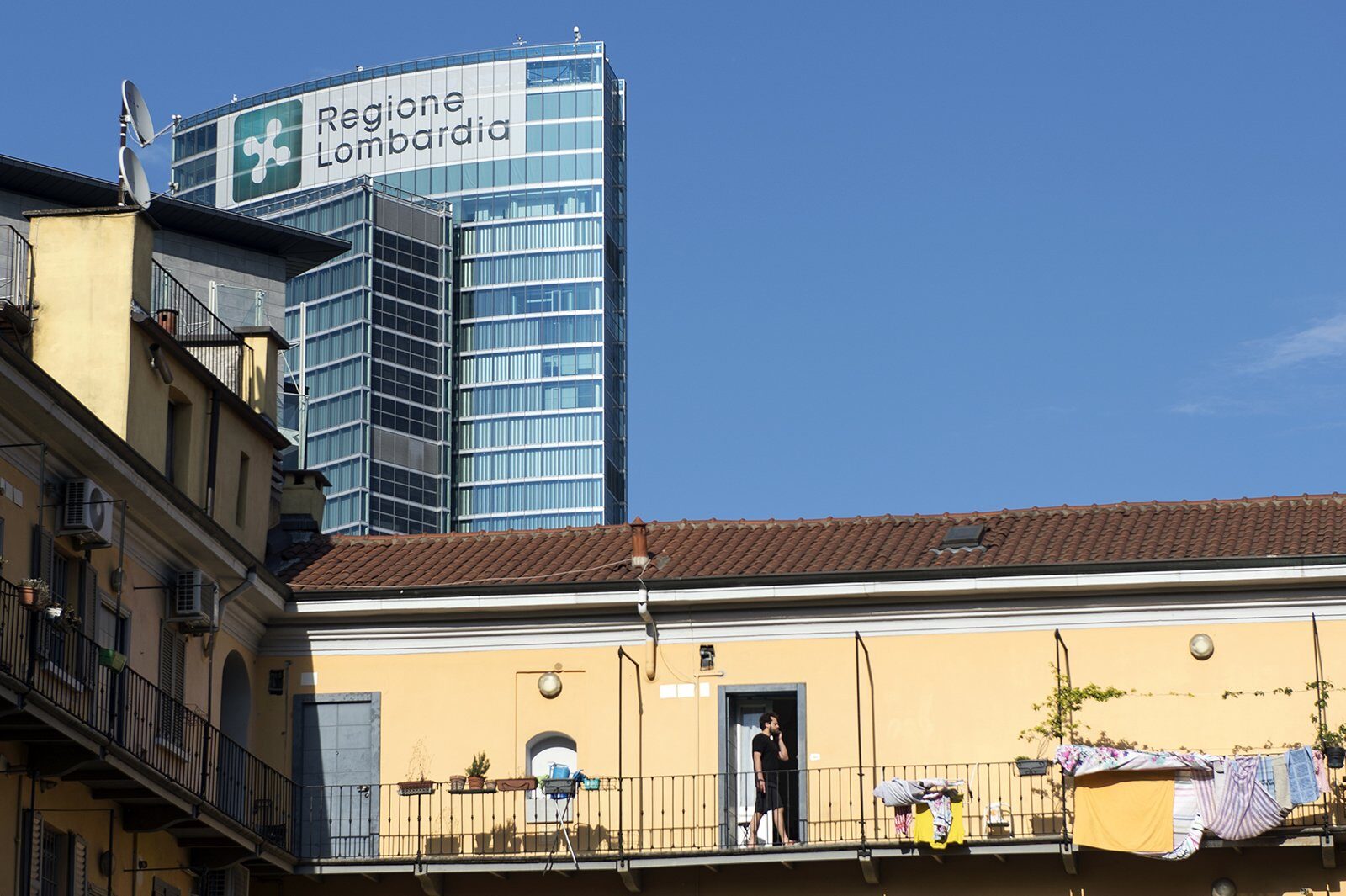 We are still far from reaching an exact understanding of the spread of the Sars-Cov-2 infection in Italy. The sources of the national data- the Italian National Institute of Healthcare (ISS) and the Department of Civil Protection- provide a rough summary outlook of the epidemic through the number of the infections, the recoveries and their outcomes, and the number of deaths associated to Covid-19. In order to build a picture that is closer to reality it is crucial to obtain the data on the total mortality of the entire population. These represent a non-distorted indicator that allows to acquire the data on the excess of mortality attributed to the Covid-19 epidemic, either directly (mortality by Sars-Cov-2 infection) or indirectly (for example due to changes that affected the care of patients suffering with chronic or acute conditions during the emergency).

The readiness of the SISMG (Daily Mortality Monitoring System)

However, at the beginning of the pandemic these data were not available for the whole national territory and monitoring the trend of the daily mortality was only possible thanks to the Daily Mortality Monitoring System (SISMG). This is a standardised instrument that is active in 32 large local authorities in Italy. The curves displaying seasonal mortality allowed to record since the beginning- while the Covid-19 epidemic was unfolding- an increase in deaths compared to the average of the previous five years (see the graph). This increase was preceded by a reduction in mortality, observed in the months prior to the epidemic (approximately 8 per cent less), that could be attributed to the low lethality of the seasonal flu and the fact that winter temperatures were higher than average. This phenomenon might have increased the pool of subjects considered high-risk due to age and chronic illness factors, who were then exposed to the Covid-19 epidemic from the end of February 2020 [1]. 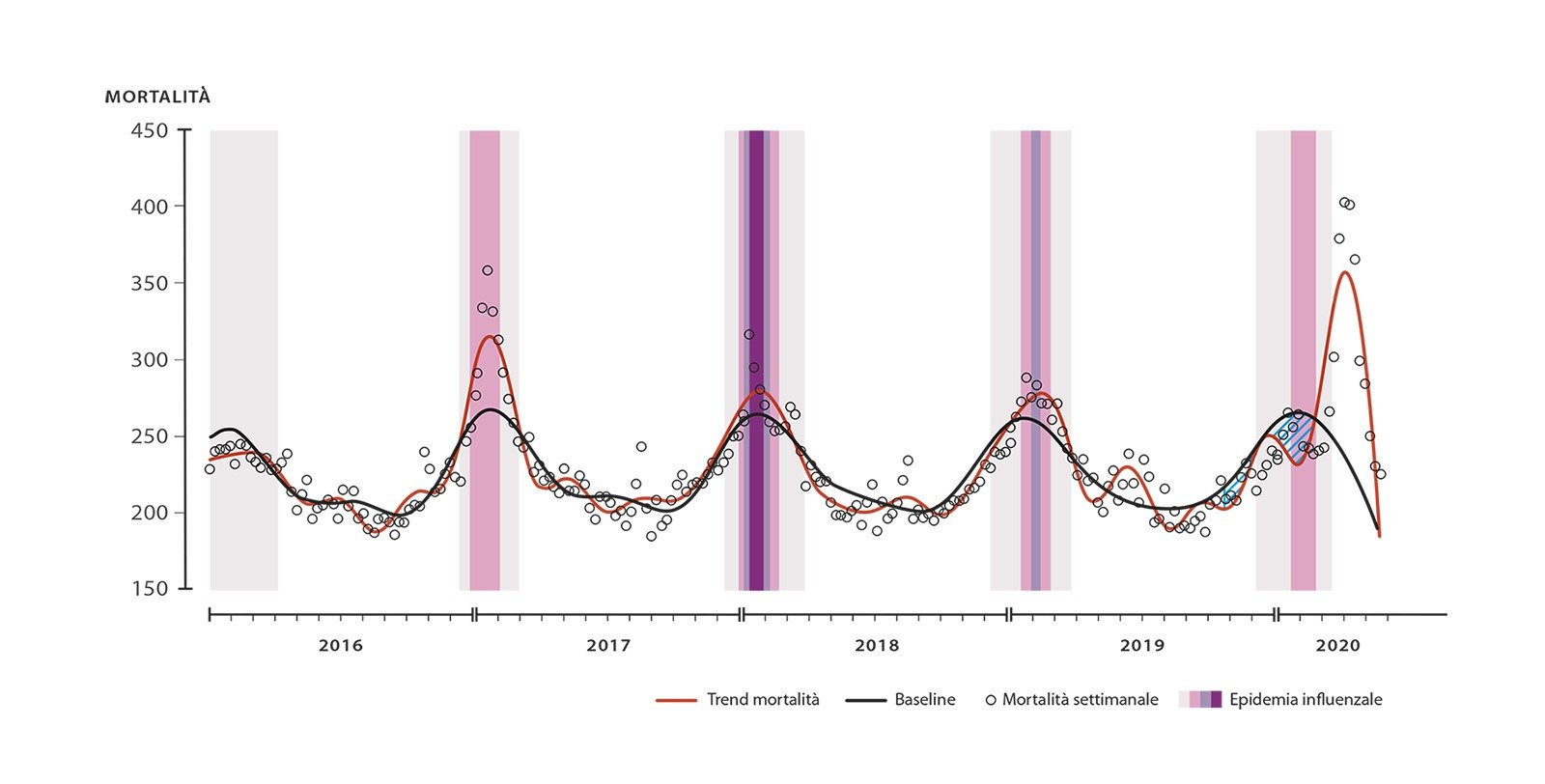 Seasonal pattern of the mortality rate per week in Italian cities, provided by the SISMG system. January 2016-19 May 2020.

The monitoring work also allowed to record great differences in the mortality related to the level of infection, the interventions that were made and to document a return to “normality”. After more than two months the mortality figures have returned to the baseline values recorded in the previous five years.

Furthermore, the data from the SISMG highlighted significant differences in the mortality curve trends of the different cities, recording the highest excesses of deaths in northern Italy, in particular in Brescia and in Milan (respectively +143 per cent and +90 per cent than the average- data updated on 12 May), and also in other cities that should be the object of more in-depth evaluations, such as Genoa (+63 per cent) and Ancona (+64 per cent).

This observed geographical disparity in mortality seems to also confirm the efficacy of the containment measures that were put in place in the centre and southern parts of the country before the arrival of the virus.

During the epidemic the ISTAT (Italian National Institute of Statistics) provided the data on the total mortality of local authorities. These figures result from the integration of the national register of the residential population and the tax registers. The data were released with further updates- starting from the northern local authorities- that were made based on the observed excess. When reading and interpreting this data one should take into account the distortions of certain estimates that result from the selection criteria of the sample, directly linked with the studied variable.

Starting with the data of 6,866 Italian local authorities (87 per cent of the total), the ISTAT, in collaboration with the ISS, estimated that an excess of 25,354 deaths took place in Italy since the start of the epidemic on 31 March 2020. Only 54 per cent of this excess was diagnosed as Covid-19 and 91 per cent was concentrated in the northern regions that experienced a high spread of the infection [2]. The same source of data, updated on 15 April, was utilised for a subanalysis of 4,433 local authorities (around 50 per cent of the total) and estimated an excess of approximately 23,000 deaths [3].

The second ISTAT/ISS report, updated on 30 April, on almost all local authorities (92 per cent of the total) [4], estimates a total excess of approximately 43,000 deaths, less than the month before, which is in line with the decreasing phase of the mortality curve. The reduction of the total mortality rate not associated with Covid-19 and decreased by roughly 20 per cent. It is an interesting piece of data that should be explored further, especially in Lombardy as it records the greatest decrease in mortality.

The INPS (Italian National Institute for Social Welfare) also made its own estimates of the excess of mortality in Italy: 18,000 more deaths than the net mortality by Covid-19 and the defect of mortality that preceded the epidemic. Even though all the elaborations of data utilised the same databank they looked at subgroups of different local authorities, with their different updates and assumptions, thus resulting in different estimates of the excess of mortality. However, the results are coherent when evidencing a much greater increment in mortality (approximately 50 per cent higher) compared to the Covid-19 deaths that were recorded, and the need for in-depth analysis, which is only possible when the data on the mortality by cause are available [3,5].

In the future it will be important to have the changes on the ISTAT data on mortality (the only figures that allow for national and regional estimates to be made), while still verifying the coherence of the produced data. In addition to these the SISMG guarantees “real time” monitoring and allows to plan swift response interventions.

Special thanks go to the SISMG working group: Francesca de’ Donato, Matteo Scortichini, Manuela De Sario, Fiammetta Noccioli and Daniela Orrù from the Department of Epidemiology at the Lazio SSR (Regional Healthcare Service), and Pasqualino Rossi from the Ministry of Health.