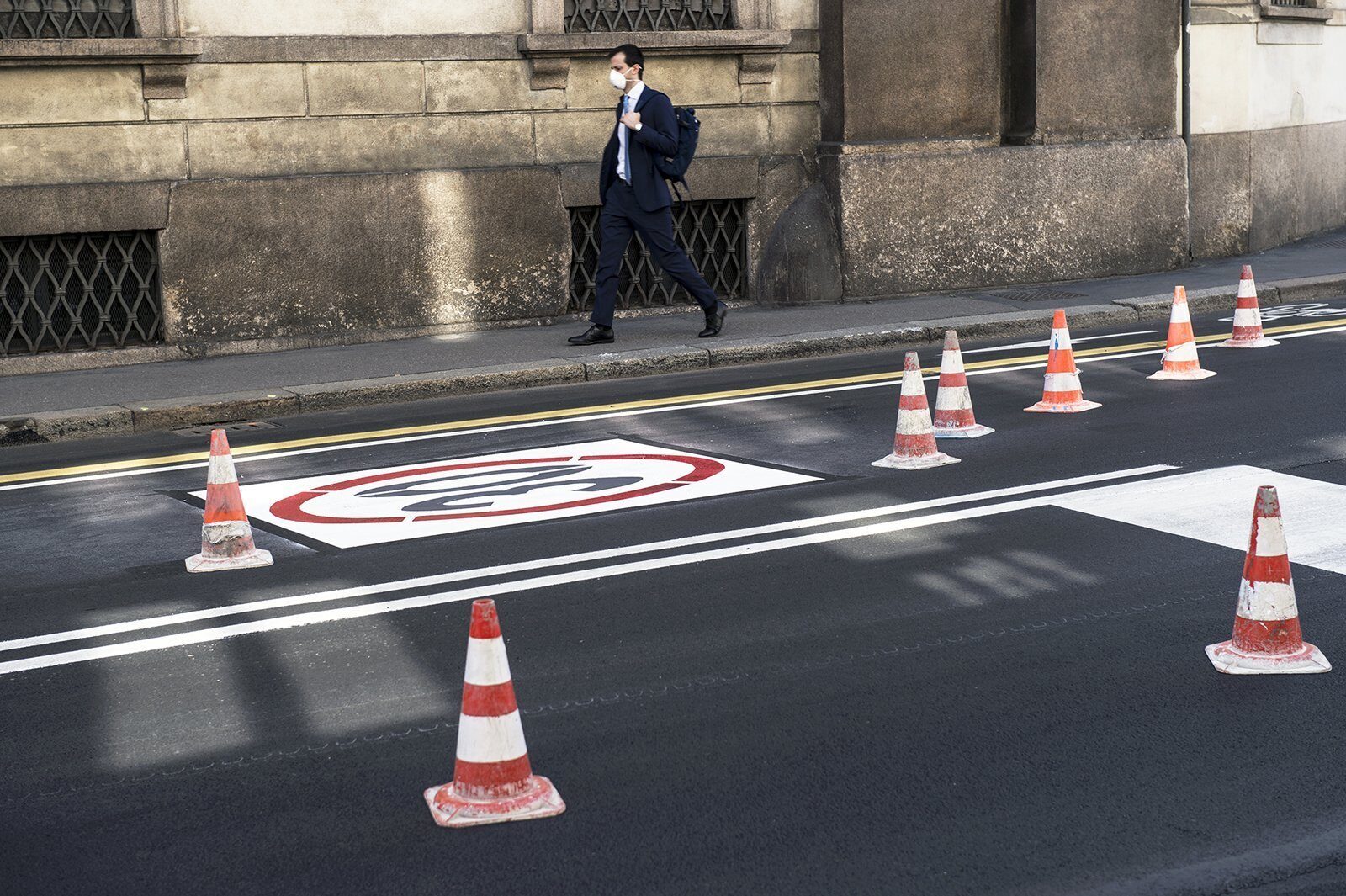 A challenge encountered during the clinical management of the pandemic was the lack of shared vision. 90 days on since the start of the emergency what do you believe could be considered a standard of care?

Marco Vergano 90 days on since the beginning the standard of care for Covid-19 patients that require intensive care remains centred around supporting vital functions, as no significant data showing a treatment that would radically change the course of the disease has emerged during these months. The use of antiviral combinations diminished compared to the first few weeks and only remdesivir has proven to be effective, although further randomised clinical trials are required to confirm its efficacy. Immunomodulatory drugs have shown to be promising while the use of anticoagulants went from the regular prophylactic use to a full dosage in most critical cases. The use of steroids remains controversial.

Giuseppe Maria Corbo I had the opportunity to work with a multidisciplinary team comprising of infectious disease specialists (to manage the infectious aspect of the care), geriatricians (to manage the care of vulnerable patients) and pulmonologists (to manage respiratory failure). It was immediately evident that there was no standard of care. The clinical picture that patients presented with seemed very variable initially but it soon became clear that attention should be placed on a few key aspects: the presence and degree of respiratory insufficiency, the degree of infection and the comorbidities of the patient. The pathology displayed a variable evolutionary potential in individual cases. Systems for oxygen administration and the continuous monitoring of oxygen saturation levels were implemented, with frequent blood gas analysis checks. The respiratory conditions of patients could worsen very rapidly, which required continuous diagnostic and treatment decisions.

The clinical picture that patients presented with seemed very variable initially but it soon became clear that attention should be placed on a few key aspects. Giuseppe Maria Corbo

Simone Lanini As of today there is no standard of care with regards to antiviral treatments. There are some drugs that can be used but their effect has not yet been fully confirmed by randomised clinical trials. Instead, what we do have is a standard of care to manage the serious complications of this illness, which from the respiratory standpoint has a similar presentation to the acute respiratory distress syndrome. Based on the guidelines for the treatment of acute respiratory failure it is necessary to guarantee access to intensive care for patients in critical conditions. Additionally, a significant number of hospitalised patients suffers comorbidities and therefore requires care from specialist units that can grant access to different machineries and professionals, for example patients suffering with chronic renal failure, patients with heart disease or significantly overweight.

The approach to patients has transformed. In this case what has determined the change?

Marco Vergano When the pandemic hit we certainly started taking care of our first patients as if we were “navigating a boat that we were still building”. An impressive amount of medical and scientific information was exchanged during the pandemic using new modalities and at an unprecedented speed. The accessible contents in all major journals, the simplified publication processes, the lowered thresholds in terms of acceptance rate and peer review rigor all contributed, for better or for worse, to the “info-demic”. The webinars, the social media groups and the networks connecting colleagues almost erased the boundary between formal and informal, to the point of generating incorrect interpretations, hostilities and enthusiasms not backed up by data and appeals to reason. The approach has definitively changed, so much that only a few weeks later what used to be the standard did seem “old”. The approach to ventilation strategies that my resuscitation specialist colleagues and I adopted became less pragmatic as we grew more aware of the complexity of Covid-19, which was experienced as a “simple” interstitial pneumonitis in the very first days. Unfortunately we also became more aware of our role. At the beginning we attempted to establish clinical and ethical triage criteria for scenarios involving the disproportionate use of resources and we were accused of discrimination, as if intensive care were a definite lifesaver and whoever was left out of it would meet sure death. A few weeks later, when faced with a much higher mortality than we were used to, extremely long hospitalisations and sometimes heavy consequences for survivors, we had to acknowledge that “intensive care units are not a panacea”.

We had to acknowledge that “intensive care units are not a panacea”. Marco Vergano

Giuseppe Maria Corbo The antiviral treatment was modified over time thanks to data from controlled trials and it has been recently defined in the document of the Italian Society of Infectious and Tropical Diseases of the Lazio region. It was immediately evident that such treatment could only be effective in the early phases of the illness, during the viral replication period. It should be noted that these treatments are not exempt from collateral side effects (for example the prolongation of the QT interval) and therefore required a closer ECG monitoring. The main change to the treatment was the implementation of a heparin prophylaxis with higher dosages than what the guideline indicates for other pathologies, based on the evaluation of the pulmonary embolisms and the coagulation parameters. Thanks to the literature data and the experience of the Italian centres it was possible to elaborate a treatment route where the doses could be adapted to the individual patients.

What issues do you think not having a better-defined standard of care caused in terms of patient assistance and the search for a cure?

Simone Lanini It is the challenge that the medical community has to face every time there is a new emerging pathogen with a pandemic potential. The problem is how the scientific community prepares to provide a response to citizens. This time, just like with Ebola, we started giving drugs too often and without controlled clinical trials data because of the sense of urgency and the perceived need to do something for the particularly critical patients. From a certain point of view it all has a rationale but it takes away the opportunity to define the degree of effectiveness and safety of the new treatments with a solid scientific method. Specifically we risk not knowing which drugs are really effective and which ones might actually be harmful. Even the main drug utilised for this pathology, remdesivir, once tested in a randomised clinical trial, did not have the extraordinary efficacy that was expected. The Lancet journal, that published the first randomised clinical trial conducted on 237 patients, literally stated, “(…) remdesivir was not associated with statistically significant clinical benefits. However, the numerical reduction in time to clinical improvement in those treated earlier requires confirmation in larger studies” [1]. The New England Journal of Medicine recently published the preliminary analysis from a second larger trial (with 1063 patients) [2]. However, this second study essentially confirmed that remdesivir reduces the duration of the illness but does not significantly reduce the mortality. Essentially, at the moment no trial, with an acceptable quality level, has demonstrated the efficacy of a drug to reduce the mortality of Covid-19 patients.

We risk not knowing which drugs are really effective and which ones might actually be harmful. Simone Lanini

Marina Bianchi The issue around not having a nationally recognised standard of care for the Covid-19 pandemic makes me think about Giovanni Falcone’s words: “Generally people die when they’re alone, because they don’t have enough alliances or support.” Then we die because we’re far from one another. Even though it’s normal not to have a standard of care for a new pathogen, at the beginning of the illness it’s unthinkable not to have a national management plan for home based care that GPs can implement, as in most cases this is the most significant factor that reduces hospitalisation. On 18 April 100,000 Italian doctors addressed a letter regarding this to the Minister of Health. These treatments have potential collateral side effects and their use should only be decided after a swab test, not just a syndromic diagnosis. In the Lombardy region the swab test is not utilised for diagnosing and, until 16 April, not even to test essential workers (supermarket and service areas staff, carers) that return to work after sick leave (on 13 April I wrote a letter requesting the compulsory swab test at least for a certain category of workers). Lombard GPs received contradicting emails from the Department of Primary Care initially stating that hydroxychloroquine could not be utilised as it was off label, but further communications suggested the off-label use of hydroxychloroquine, lopinavir/ritonavir and darunavir/cobicistat but only in emergencies and with the written consent of the patient; confusing directions that came late and conflicting with national information. Not having a standard of care approved by institutions led to the hesitance and fear in prescribing the treatment recommended by the SIMIT (Italian Society of Infectious and Tropical Diseases), which would include a swab test and drugs, the use of which outside clinical trials is contraindicated by the Italian medicines agency. For example in regards to azithromycin they state: “The liability for any unintended uses not listed in the authorised indications lie with the prescriber and not with the National Health Service.” Different research studies emerged recently around the inefficacy of the most utilised drugs for hospitalised patients, hydroxychloroquine and azithromycin [3-4]. A clinical study is currently taking place [5] to verify the efficacy of the early use of these drugs.

Even though it’s normal not to have a standard of care for a new pathogen, at the beginning of the illness it’s unthinkable not to have a national management plan for home-based care. Marina Bianchi